My family has enjoyed Star Wars Launch Bay at both Walt Disney World’s Hollywood Studios and in California at Disneyland Park.  Star Tours, the simulated ride, is a must do on both coasts.  We queue up to watch The March of The First Order and stake out prime spots for Star Wars: A Galactic Spectacular nighttime show.  We (meaning “I”) have a love/hate relationship with Kylo Ren and his meet n’ greets.  We even sailed with our favorite Star Wars characters on a special Star Wars Day at Sea voyage on Disney Cruise Line! So, the anticipation for Star Wars Galaxy’s Edge at Disney’s Hollywood Studios and Disneyland Park is almost too much! Aside from the new lands that will be a recreation of Star Wars and its universe, there is a special, new Star Wars themed hotel coming to Walt Disney World.

We still don’t have many details about this Star Wars themed hotel but here’s what we do know. This hotel will be like no other!  According to the most recent D23 event, the new Star Wars hotel will go beyond Star Wars theming to give guests a fully immersive experience. Plans and documents filed with local government show the new Star Wars hotel will be located near Disney’s Hollywood Studios. While many speculated that it would have direct entrance into Star Wars Galaxy’s Edge, this is not certain at this time and plans do not appear to support this theory. One thing plans do show is that there does not appear to be a parking lot.  If so, this would give guests the feeling of being in a different universe from the moment they arrive. The hotel appears to be small, which would add to the exclusivity of it. How exclusive? There are rumors that visitors would not be permitted, and only registered guests will be allowed entrance.

While we all wait impatiently for more news, the one thing most everyone wonders is just how much the new Star Wars hotel will cost per night.  I don’t have any insider information but if I had to guess, I’d say it may very well be the most expensive resort on property when it opens.  I would also guess that it will stay filled to capacity.  After all, there are a lot of Jedi roaming around. They will need somewhere to rest after a full day at Star Wars Galaxy’s Edge.

When will this one-of-a-kind new hotel open?  Be patient you must!  There has been no approximate date of completion announced.   Don’t worry though!  As soon as a date is announced, we here at Disney Addicts will let you know!

Are you ready to dive into the Star Wars universe on land or on sea and make magical memories of your own? Contact me via email or submit the form below for your free quote! As a College of Disney Knowledge graduate and Senior Travel Planner with Key to the World Travel, the official travel partner of Disney Addicts and Chip & Co., I am your best resource for a stress free, magical trip!  As a full-service agent, I am here to help you with all Disney destinations worldwide, Adventures by Disney, and Disney Cruise Line as well as all theme park vacations, all cruise lines, and more! Best of all, my concierge planning services are FREE to those who book their vacations through me! Contact me today and follow me on Facebook and Instagram for travel related news–Disney and beyond. 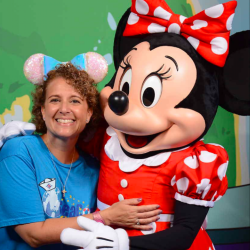 Follow me
Theresa Perry
Travel Planner at Key to the World Travel
Theresa is lifelong Disney lover who was born and raised in South Florida just a short drive from the House of Mouse before moving to Alabama. As a longtime Walt Disney World Annual Passholder, she has now given a piece of her heart to Disneyland and Disney Cruise Line too.In addition to being a wife, mom of 3, and veteran special education teacher, Theresa is a full service Travel Planner and Mentor with Key to the World Travel and she is proud to be an IBCCES Certified Autism Travel Professional.When not helping clients travel all over the globe to all destinations (Disney and beyond!), she enjoys traveling with her family, college sports, and planning her retirement to Florida.

Follow me
Latest posts by Theresa Perry (see all)