Star Wars fans are abuzz at the announcement that Galaxy’s Edge, the new Star Wars land, will be opening earlier than expected on August 29th, 2019. For some people, this new was less than welcome. Regardless of how you are feeling about Galaxy’s Edge, there are a number of reasons you may want to get in one more Walt Disney World vacation before it opens.

Starting with the most obvious reason to visit Disney World before Galaxy’s Edge opens – it is going to get CROWDED. Hollywood Studios, home of the new land, will be hit the hardest. Disney does an amazing job with crowd control and Galaxy’s Edge will be no exception. There will be no FastPasses available for a yet to be determined time after it opens. They will also be limiting the number of guests allowed into Galaxy’s Edge in order to keep it a safe experience for everyone. This will result in a spillover of guests waiting for their chance to experience Galaxy’s Edge into other areas of Hollywood Studios for sure, and likely into the other parks.

If you do a little planning and have your expectations set ahead of time, it is absolutely possible to have a great time at Disney World even when it is crowded, but if you can avoid the crowds that is the best scenario.

Disney World frequently offers a variety of room, ticket and package discounts in order to encourage guests to visit during times when they have increased resort availability. The excitement around Galaxy’s Edge opening is unprecedented. Disney World has had exciting openings in the past, the stunning Pandora at Animal Kingdom most recently, but nothing has quite matched the level of excitement that there is around Galaxy’s Edge.

With the increased interest in visiting for the new area and the benefits of staying on property, demand for the Walt Disney World resorts will continue to increase. This will likely significantly reduce the number of discounts available, so take advantage of the ones that are available now.

Another reason to get your visit to Disney World booked prior to the opening of Galaxy’s Edge – you just aren’t that into Star Wars. It’s OK – this is a no-judgment zone. If Star Wars hold little to no interest to you, get your trip booked ASAP so that you can complete your visit before the level Star Wars hoopla at Disney World really goes to the next level.

Guests Will Have a Different Vibe

Star Wars fans tend to be a slightly different demographic than for which Disney World is traditionally known. This won’t be the armies of strollers and toddlers you may think of but is going to skew towards older kids, tweens, teens, and adult only groups. Depending on who you are traveling with, this could be a bonus.

At our house, my Star Wars-obsessed husband is BEYOND excited for Galaxy’s Edge. He has accommodated my Disney fanaticism for the past 22 years and even though I don’t really care too much about Star Wars, I am thrilled that there will be a new, huge area at Disney World that makes him (and our three sons) so happy. If your family doesn’t have the same level of excitement about Galaxy’s Edge opening as ours does, it’s all good! Book your next trip now and have a blast pre-Galaxy’s Edge. Just be sure to come back eventually to check it out – it is sure to be amazing for even the non-Star Wars fans.

Ready to experience your next Walt Disney World before or after Galaxy’s Edge opens? As an agent with Chip & Co’s official travel partner, Key to the World Travel, I would love to help with your first, or next, Walt Disney World, Disney Cruise Line or Disneyland vacation! Email me at missy.graner@keytotheworldtravel.com or simply fill out the quote request below. And be sure to follow me on Facebook and Instagram.

Let our friends at Destinations to Travel help you! Just fill out the form below and someone will be in touch! 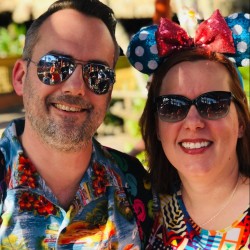 5 Reasons to Fall in Love with Galaxy’s Edge

What You Need to Know: A Guide to getting a Boarding Group for Rise of the Resistance

Your source for up-to-date trip planning information for Disney destinations around the world!

Copyright © 2022 Logo, contents, and media copyright Disney Addicts unless otherwise noted. All rights reserved. Disney Addicts is your home for the best in Disney Planning Tips and More. Disney Addicts is not endorsed by or affiliated with the Walt Disney Company, or its subsidiaries. By using this website you agree to the terms of service.
MORE STORIES